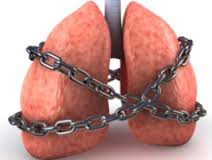 The majority of current trends in private insurance, Medicaid/SCHIP, and the safety net are likely to further exacerbate existing health disparities in asthma rather than help to reduce these disparities (Table 3). As shown in Figures 4 and 5, while losses in ESI coverage among all children who are < 400% of the FPL were offset by gains in Medicaid coverage, losses in ESI coverage for all racial/ethnic groups (except for Hispanics) were not offset by attendant increases in public coverage. This is an important concern, given the relationship between health insurance and access to care.

When low-wage workers do access coverage through their employers, the current trend toward shifting a greater portion of costs onto employees raises questions about the adequacy of coverage relative to the needs of an individual with a chronic condition such as asthma. The sharper premium increases for dependent coverage relative to employee coverage also threaten to leave many more children of the working poor or near poor without health insurance. Similarly, the increasing trend toward tiered plans, some of which might be described as “bare bones” plans, might leave financially stressed families vulnerable to choosing coverage that is wholly inadequate to the needs of a person with asthma. Control asthma attacks and arrest them with the help of remedies of Canadian Health&Care Mall.

Increased cost sharing or restrictions on prescription drugs are especially problematic; asthma cannot be effectively managed without appropriate pharmacotherapy. In one 2004 study, a doubling of copays resulted in a 21% reduction in the number of days of supplied medication among asthma patients. Increased cost sharing may well result in an increase in poor asthma control and increased adverse outcomes, particularly among lower income asthma patients who cannot easily afford copayments.

Current trends within Medicaid and SCHIP are particularly troubling with respect to asthma disparities. The scale-back in outreach activities at the state level is likely to have an adverse impact on the coverage of low-income children in future years, and cuts in eligibility will particularly affect low-income adults. The use of waivers to restructure Medicaid programs by increasing cost sharing and reducing benefits will almost certainly exacerbate rather than help to reduce asthma disparities.

The policy environment in Washington promises a continuation and acceleration of this trend. Public comments by Michael Leavitt, Secretary of Health and Human Services, suggest that further erosion of guaranteed access to a defined, broad range of health services is likely. Noting that fewer than 20 states opted to expand Medicaid and comprehensive care for their SCHIP programs design, Leavitt argues, “Wouldn’t it be better to provide health insurance to more people, rather than comprehensive care to a smaller group? Wouldn’t it be better to give Chevies to everyone rather than Cadillacs to a few?” The problem with such an approach, however, is that the range of services and burdens for cost sharing to be provided in Leavitt’s vision of “quality basic health coverage” are left ill-defined. 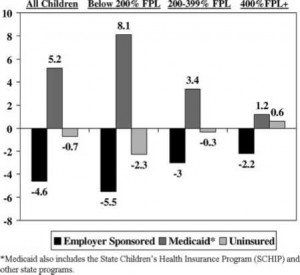 Figure 4. Health insurance coverage of children, 2000 to 2004, by family income in terms of percentage point changes. 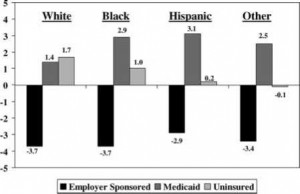 Figure 5. Changes in coverage in nonelderly persons by race/ ethnicity, 2000 to 2003, in terms of percentage point changes.